A veteran of two branches of the military today won the 2018 Mike O’Connell Trucking’s Top Rookie presented by Truckers News.

Mordaunt “Platt” Brabner, a 58-year-old Texan who drives for TMC Transportation, was recognized during ceremonies this afternoon on the America Strong Stage at the Great American Trucking Show in Dallas. Chosen from a field of nine finalists, Brabner won $10,000 and a variety of prizes. He attended Roadmaster Drivers School, and got into trucking after serving first in the Marines and then joining the Navy to become a pilot. He expects to become an owner-operator.

Not bad for a former Alabama farm boy who at 14 was driving an old Chevrolet 9500 with a Tristar shifter. Today he’s at the wheel of a 2015 Peterbilt 579 he says “is way smarter than I am.”

He says the cash prize will go into the maintenance fund for when he gets his own truck and goes OTR.

For a man who saw 91 countries as a Marine and Navy aviator, Brabner says he wants to see more of the U.S.

“I love being out on the road,” said Brabner. “Seeing the country,  I just, I love it. It gives me the freedom to get out there and just see things that most people don’t ever see.”

In a recommendation of Brabner for the award, Justyn Hardy, public relations manager at TMC wrote, “Forging a path in the trucking industry this late in life isn’t always easy, but Platt found it to be comfortable thanks in part to his military values. He sees each day as a challenge to be better and more efficient as a driver, because he feels he can make a difference in the industry. Striving to “put the professionalism back in trucking”, Platt recognizes that the trucking industry is  continuously evolving, and looks forward to aiding that (evolution) in the right direction.”

The other finalists, where they are from, who they drive for and what driving school they attended include: 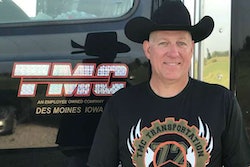 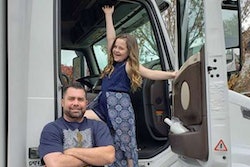 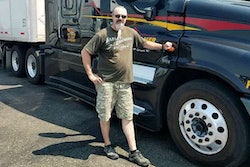