A New Mexico trucker is being praised for aiding an older couple who had been in an accident during a cold evening in February.

The Truckload Carriers Association recently named Leslie Ligon, from Albuquerque, a Highway Angel for discovering and coming to the aid of an elderly couple after their car crashed in 22-degree weather in the middle of the night.

On Feb. 18, Ligon, an ABF Freight System driver, was driving on Interstate 10 around 1:55 a.m. near Winslow, Arizona, when he noticed some debris that looked to be scattered clothes and personal belongings alongside the highway.

Concerned there may have been an accident, Ligon pulled over, walked toward the debris, and noticed headlights that were very dim off the side of the road, down an embankment.

“I grab my flashlights, my phone,” said Ligon. “As I walk up there … there are people inside this car!” An elderly couple was inside the vehicle. The woman was trapped, so the man stayed in the vehicle to keep her company. Ligon contacted emergency services and assessed the situation. The man said he was alright but the woman was in pain. Their phone was dead, so they had not called for help.

“As I’m walking around the car talking to the 911 lady, I noticed behind the front seat of the car -it’s gone – there’s nothing there,” Ligon shared with TCA. “It’s like it had been cut in half.” Ligon went up to the road and guided the arriving emergency vehicles to the accident scene. Emergency personnel attended to the couple, and told Ligon the couple reported that whoever hit them had one headlight and struck them from behind, which is how they ended up off the road.

When the fire department personnel noticed a truck down the road that had pulled over with frontend damage, so they apprehended the driver, who had fled the scene of the accident. Had Ligon not spotted the debris, investigated the scene and discovered the elderly couple in the crashed car in 22-degree weather in the middle of the night, the consequences could have been much more serious.

TCA has presented Ligon with a certificate, patches, lapel pin, and truck decals. The company has also received a letter acknowledging him as a Highway Angel. 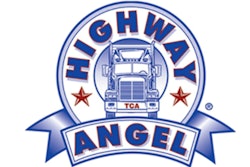 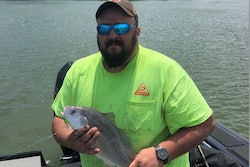 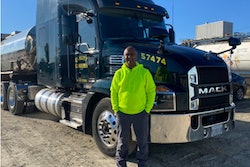