Highway closed most of Tues. when 2 trucks collide

Part of U.S. 35 in Ohio was closed for much of Tuesday, April 11 by a head-on collision of two tractor-trailers that occurred at about 6:30 a.m. near Jackson, Ohio south of Columbus.

WSAZ-TV reports that the truck driven by Goitom Medhin, 49, of Charlotte, North Carolina, was westbound when it crossed the highway and into oncoming traffic. It struck the semi driven by Eric Hiester, 51, of Lawrenceville, Georgia,

Medhin was airlifted to Cabell Huntington Hospital where he was listed in serious condition in ICU but stable, and Hiester  was taken to Holzer Hospital in Jackson with minor injuries,according to WSAZ.

Cleanup of the highway was difficult as one one of the trucks was loaded with bottles of soda, many of which spilled.

At about the same time, there was a separate crash involving a minivan and a passenger car.

Both occurred not far from the A & A Truck Stop. 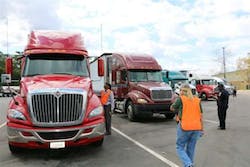 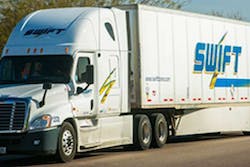 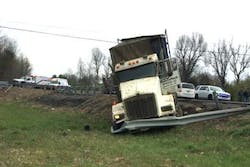 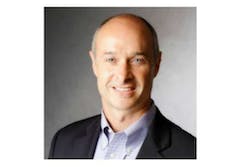