Ride-along: Inside looks at how 2 women do their jobs

This year, the Truckers News and She Drives editors were charged with lining up trucker ride-alongs to experience the trials, tribulations and triumphs of being an American truck driver. Nothing gives you a deeper understanding of a trucker’s life and times than climbing into the cab of an experienced pro.

That’s why I was excited about my opportunity to ride with two different female truckers from Saia LTL Freight, a company which includes 148 terminals and more than 9,000 employees covering 34 states (soon to be 36 states), including Louisville, Kentucky, where my journey began. 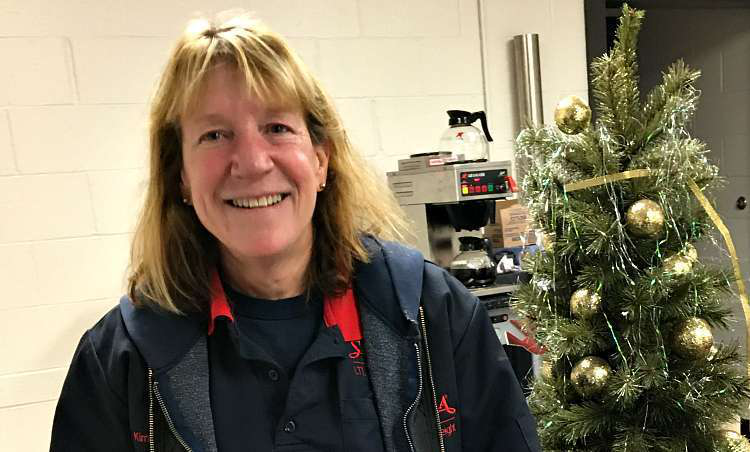 Other than polishing my old cowboy boots and packing a suitcase full of warm clothes and work gloves, I couldn’t think of anything else I needed to do to prepare for two days of trucking. In retrospect, I should have added gym workouts to my daily schedule. I was excited to start my adventure and meet my Saia contact, Courtney George, a human resources project specialist who jumped through whatever hoops it took (probably more than she let on) to let a truck journalist ride shotgun with a company driver.

Courtney, as vivacious in person as she had been on the phone, met me at the airport, and we made our way to the terminal in Louisville, Kentucky. I peppered her with questions about their (highly competitive) driver compensation packages, benefits (lots of them, including dental and vision plans), vacation, training and career paths. I was impressed by the commitment to attracting the best, safest drivers and the continued emphasis to retain them.

Last summer, Saia brought women drivers to Dallas for a gathering that encouraged networking and mentoring all focused on helping bring more women into the ranks of this $1.2 billion company.  While women make up only a small percentage of Saia’s nearly 9,000 employees, this meeting offers a support system for each other.

We arrived at the warm, inviting terminal, in which one corner was piled high with Toys for Tots donations to distribute for the holiday season. There was a sense of family between the drivers, dispatch and managers and they made me feel right at home.

My driver, Kim Holt, greeted me, and we got right down to business. We would be pulling doubles from Louisville to St. Louis and then on to Indianapolis and back. Once she finished her pre-trip inspection, I climbed aboard, and we were off with country music on the radio as a soundtrack for our journey.

It was still early afternoon and the traffic was fairly light. I tried to get comfortable in the seat and gratefully took her advice to use extra pillows for lumbar support. She packed light with only a cooler of snacks and ice for drinks. She gave me an interior tour of the truck, including the electronic logging device and outward facing camera. She didn’t mind the devices and said the ELD made her paperwork a breeze.

Before Holt took up trucking, she was a horse trainer/exerciser at Churchill Downs. She related fascinating stories of life among the top racehorses, owners, trainers, jockeys and vets that made up the Downs community. Like being a female truck driver, it was a rare sight to see women around the stables where she worked seven days a week for 18 years. “I was used to handling myself among the guys,” she says. Her work ethic and grit helped her land a career with Saia. The $70,000- $80,000 total compensation/benefits package was enough to give her the independent life she loves, while still being near to her beloved racetrack. 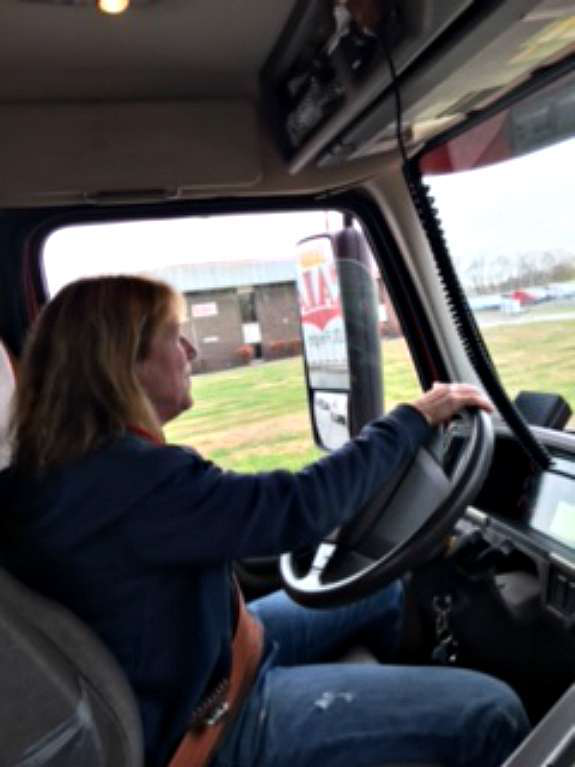 Holt has been driving linehaul for Saia LTL Freight for more than two years. Trucking came naturally to her and she breezed through the CDL training and then learned how to operate doubles. Drop and hook is not as easy as it looks. In fact, since you can’t back up with the two trailers, the constant hooking and unhooking requires stamina, muscles and good cheer.

“There’s no point in getting mad at anyone,” she says when I mentioned how calm she was during the various obstacles we encountered. The easy camaraderie between her and the dock and terminal workers was also impressive, and at most stops, they made a point of telling me how professional and just plain “good at it,” she was. Though one guy looked stricken and whispered to her, “Did you do something wrong?” thinking I was her boss checking up on her.

After a glorious sunset that lit up the St. Louis Gateway Arch, the day melted into night and we drove through the darkness, passing the usual assortment of texting teens, distracted drivers and friendly truckers who waved or nodded as they lumbered by. Holt enjoys driving the night shift and seemed energized by the nocturnal activity around us. She likes the routine of linehaul and has adjusted to sleeping during the day.

I, on the other hand, struggled to stay awake, and by the time she dropped me off at my hotel, I was fried. She was planning to get a full day of sleep before going back out but I had a local ride-along scheduled in a few hours.

Angie Rowlett picked me up at my hotel a few hours later for a day in the life of a local city driver. If I thought beforehand that local delivery and pick-up would be easier, I quickly learned that was definitely not the case. Angie, pretty, warm and almost impossibly kind to everyone, made a grueling day seem like an adventure. 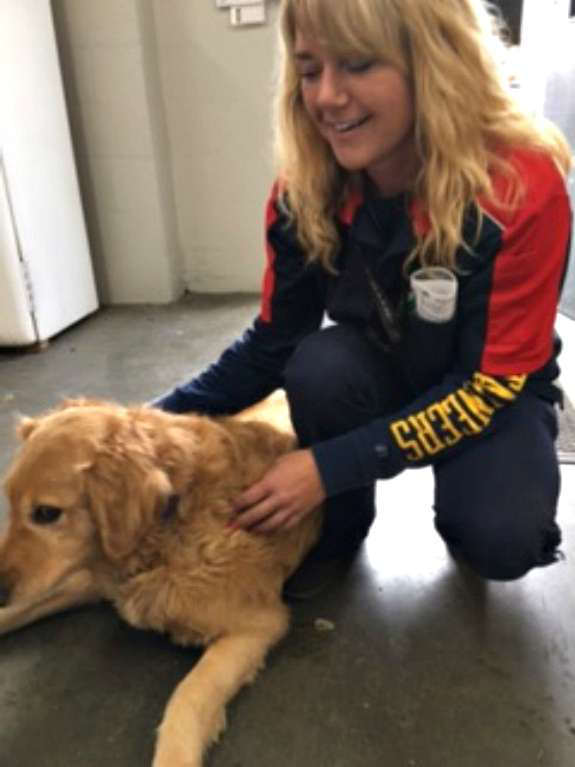 Angie Rowlett and a friend

Angie came to Saia more than five years ago with nearly 18 years of trucking experience. She started as a young 20-year-old team driver with her husband, and they continued their over-the-road trucking career with various fleets hauling everything from flatbed to reefer. When the planes hit the twin towers on 9/11, she was trucking down Donner’s Pass, en-route to the Sacramento, California, airport where they had to deal with huge security issues and delays. After her marriage ended, she drove for various companies until she decided to sign on with Saia for a new challenge.

“I wanted a life,” she says with a laugh. And for her, that meant it was time to come off the road and hire on with a company that offered a city route that got her home every night with weekends free. She’s never looked back.

Other than attending the Mid-America Trucking Show, I had no idea what to expect in Louisville. Angie, on the other hand, knew every back road, short cut and secret pathway around the city. In one full day, we made 22 pickups and deliveries with one short stop to grab lunch.

I have no clue how she figured out how to fit in the whole day’s worth of deliveries and pickups. Her dispatcher was sending her notices via phone, but I loved watching how she was constantly planning. “If we hit this place right before the moms line up in the carpool line, we can make it. Otherwise, we will have to tack back right before closing,” she said as the clock ticked down the hours.

Here’s how it goes at her stops:

Angie backs into the dock, sets the brake and cuts the engine.

I leap out of the truck and scurry to the dock entrance to meet her.

She says hello to the workers, hoists up the trailer door and then attends to the paperwork and unloading or loading. 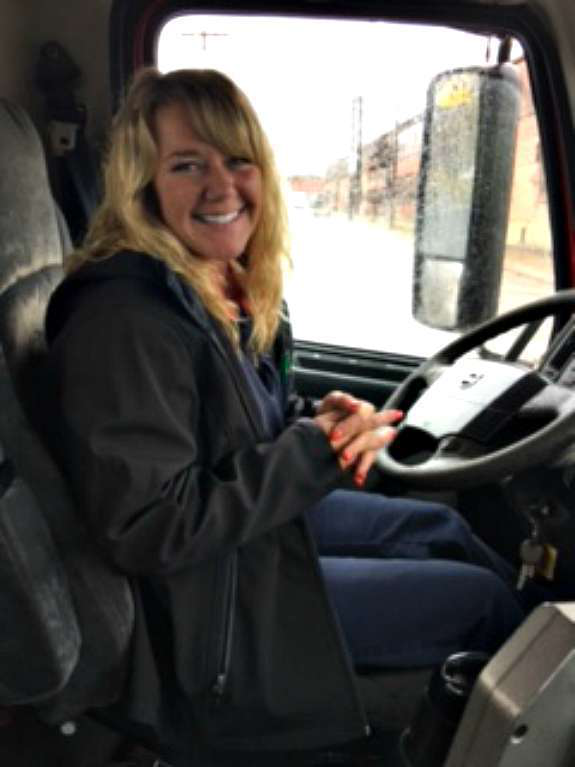 The managers and workers all know her by name and they light up when she enters the room. I mentally take notes as she promises to catch up with them “next time,” since she’s behind on her day. She manages to be friendly and warm, call them by name, ask about their dog/kid/wife and still scoot out the door, ready to get to the next stop.

“You never know what kind of a day someone is having,” she explains when I ask how she can be so nice to everyone, including the few cranky ones.

“She’s the best. She’s a ray of sunshine, a hard worker, can show the boys off,” were the comments sent my way. The common thread was to compliment her great attitude. “Nobody does it like Angie,” said one warehouse owner as he drove the forklift into her trailer to pick up a pallet.

“I love trucking, and diesel is in my blood,” she says. “It’s a job where I’m equal to the guys. I get paid the same and I do the same job,” though, according to the dock managers I met, she does it better.

Last summer’s Dallas conference meant the world to her. “It was a chance to meet other Saia women drivers and really bond with the group. I loved all the speakers and really appreciate the opportunity. It’s just another great perk of working for Saia,” she says.

The best part of her job is how every day is different. “It’s always a challenge. You have to constantly be looking ahead, figuring out the day like a puzzle. Each piece fits and then, you go home. Tired, but content with a good days work.”

A decent salary, city drivers can make $45k-$65k along with full benefits and vacation time. She likes to redo old furniture and go four-wheel driving in her old jeep on weekends.

The day flew by, and once the last load was picked up, we headed back to the terminal. I felt humbled by her great attitude, work ethic and genuine pleasure in putting in a hard day’s work. She was still smiling when I took off.