When it comes to the driver shortage, trucking is “trying to take a knife to a gunfight,” said Dave Jackson, president and CEO of Knight-Swift Transportation, during a panel discussion at the Commercial Carrier Journal Solutions Summit, held in Phoenix, Arizona recently.

The unprecedented efforts carriers have made this year to attract drivers have not been enough, he said. Increased wages and bonuses, more advertising and beefed up recruiting departments have only resulted in the industry adding about 33,000 drivers. “That’s all we can do?” he asked. “That tells us we haven’t kept pace. The desire for the job is not there.” 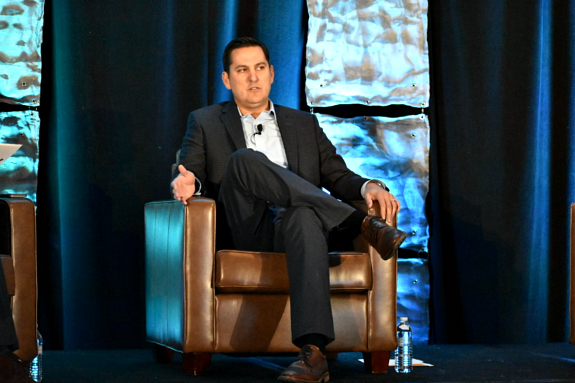 One area where trucking is behind other industries is inflation-adjusted wages, Jackson said. To keep up with inflation, drivers “should be making $72,000,” but on average they made around $54,000 last year.

Raising driver wages is not possible without topline growth, Jackson said. “When rates go flat or negative, as in 2016, we saw virtually no driver wage increases.” Wages didn’t start to climb until late 2017 when rates improved, he said. “If we find ourselves next year with rates slow or stalling, driver wages will do the same,” Jackson predicted. Trucking needs more years like 2018 for driver wages to catch up, he said.

Beyond falling behind on wages, trucking has also failed to compete with other industries in recruiting women into the industry. Women only represent about 6 percent of the trucking workforce, despite growing dramatically in virtually every other labor pool, Jackson said. Knight-Swift’s percentage of women employees is higher than that and Jackson cites the company’s commitment to hiring females. “There is a lot we can do as an industry to be more inviting,” he said, but adds: “That being said, we’re looking for good, honest, hardworking individuals regardless of race, religion, gender or sexual orientation.”

Citing increased safety risks, Jackson is not a proponent of proposals to lower the driving age to 18 to get younger entrants into the industry before they choose another career path. He concedes that safety technologies could offset some of those risks, but the cost – about $30,000 per truck – is prohibitive. “It would, in essence, be a truck that’s capable of driving itself,” he said. “What does that do to wages if you have to invest that much in the truck in order to accommodate younger drivers?”

One area where Jackson sees potential to mitigate the driver shortage is improved productivity. With a fleet of almost 19,000 trucks, Knight-Swift’s drivers average 6.5 hours per day of driving time. “We leave so much productivity on the table,” he said. Shorter lengths of haul contribute to reduced driving time, but Jackson sees an opportunity to offset those losses through more collaboration with customers on appointment times.

Joshi was appointed by President Joe Biden as deputy administrator in January. The ATA sent a glowing letter of support to the committee.