To read reports in the non-trucking press about the dramatic arrival of the Freightliner Inspiration Truck Tuesday (May 5), it seemed as it heralded everything from the birth of a new machine age to the death of the Teamsters … and a lot in between.

We took a quick spin through some high-profile media, and here’s what they had to say about the roll out of Freightliner’s self-driving truck.

“Two of the Daimler trucks are being driven exclusively in Nevada for show. So don’t expect to see a self-driving truck transporting actual goods on a highway near you anytime soon. But the trucking industry is eager to test the technology, and awaits national laws to make it feasible to implement the technology.”

“Trucks aren’t sexy, but they’re critical to our economy, and there’s gobs of room for improvement in their safety record and efficiency. Autonomous driving—even in a limited form—can deliver it.”

The Christian Science Monitor carried the Associated Press story that included this:

“(Daimler Trucks North America CEO Martin) Daum said society might forgive a number of deaths caused by tired truck drivers at the wheel but they would never forgive a single fatal crash blamed on a fully automated big rig.

“That’s also why the company has no intention of ditching drivers. Instead, in this new autonomous world, the driver would be more of an on-board logistics manager.”

Here’s what Sean O’Kane said on The Verge:

“The Inspiration Truck and Daimler’s underlying “Highway Pilot” technology isn’t meant to replace truck drivers completely. Instead, it’s meant to solve the problem of fatigued driving, something that plagues truck drivers who have to pull long shifts. According to Daimler, 90 percent of truck crashes result from driver error, and in one out of every eight of those cases driver fatigue plays a role.”

CNN Money called on an industry insider for his view of the Inspiration Truck:

“Not everyone is sold on the idea of self-driving semis. Scott Grenerth is director of regulatory affairs for the Owner Operator Independent Drivers Association (OOIDA), a group that represents independent truckers. He spend 13 years driving big rigs, he said, and he’d be very nervous handing control of an 80,000 pound vehicle to a bunch of cameras and sensors.”

Antuan Goodwin at c.net.com invoked Transformers imagery in his report:

“The Inspiration Truck doesn’t transform into a giant humanoid ‘bot, but this robo-truck also doesn’t need any autonomous vehicle-specific infrastructure, special beacons or special lanes of its own. The camera-based technology needs only clear roadside signage and crisp white stripes — which, coincidentally, are also helpful for human drivers as well.”

“Its technology could hypothetically eliminate the need for a driver completely, though current designs and regulations call for a qualified driver to be in the cab at all times.

“Nonetheless, the specter of fully automated vehicles in the future could lessen the negotiating power of major drivers’ unions, including the truck-driving branch of Teamsters.

“That union today told DailyMail.com that they ‘question the autonomous truck idea’ and feel that a human driver will always be essential to guarantee safety on the roads.”

And, this from Tech Times:

“If you’re not a big fan of the big rig and tend to have those nightmares where the huge commercial trucks are driving too fast and are seemingly heading to plow you off the deserted highway, then you’re not going to be too thrilled to learn the latest innovation in truck technology: the autonomous, or self-driving, truck.” 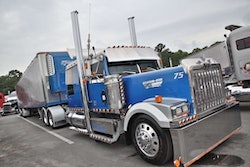