Truckers have their say about survey of four-wheelers

To all the four-wheelers who said they are better and safer drivers than the men and women who drive tractor-trailers and other trucks for a living, those professional truckers disagree. Vehemently. In large numbers.

Last week we posted results of a survey by a trucking technology company that said “83% of those surveyed believe they pose less risk on the road than commercial drivers.” The survey added:

Then truckers had their say.

From the “Comments” with the original story came:

Jonathan Lee: “They are the least experienced and most dangerous they don’t acknowledge speed limits, yield signs or any other traffic control signs. I along with my fellow drivers who have dashcams and hours and hours of idiot four-wheelers doing their daily stupidity.”

JMC: “No way four-wheelers are safer than us commercial drivers. 20 yrs out here and I see more texting, eating, speeding, and unsafe lane changes coming from cars constantly cutting us off just to get ahead for line of sight. Then they slow down. Really?

Ed: “Hey Verizon come ride with a trucker we shall show you is unsafe at the wheel.”

TexasJester: “Professional driver for 34 years, 4.2 million safe miles, here. The number of incredibly stupid moves I see from 4-wheelers on any given day are legion. Then there are the idiot truck drivers – mostly young and/or foreign. Just yesterday in New Jersey, I called a company to report a driver watching a video on his phone – while hauling placarded flammable!”

Lisa Harris: “I believe truckers are getting bad rap. When you’re in heavy traffic you see a lot of cars texting, and putting on makeup. Clearly their distracted driving.”

Virginia Harlow: “Number one rule of the road here in Iowa is ‘Me First’ when it comes to four-wheelers!”

Richard N: “I’ve been driving for fifty (50) plus years and I have seen almost all there is to see when it comes to safety. Four wheelers are the most dangerous to the motoring public. I will admit that there are some so-called professional truck drivers that are a risk to the public. We as AMERICAN truck drivers have a responsibility to set the right example of driving on American roads and streets.

Many of the comments here hit on precisely the bad habits of the four-wheeler drivers. But we must take into account that they don’t make a living driving. Their main objective is to get to point B from point A.

As for the so-called survey that Verizon did, I call it a bunch of BS much as what Benny said.

Benny: “I call BS. Verizon should walk around a truck stop and ask us those same questions. Their survey would look a lot different.”

Freddie With a Machete: “I try to count sometimes how many times I get cut off in a single day by a dumb four-wheeler who doesn’t even bother to turn his blinker on … I lose count. Then they tell us to leave more space or you’ll get a ticket … You leave more space and more dummies cut right in front of you and force you to brake hard to avoid making pancakes out of them.”

Richard Davis: “Most people driving a car look no-further than maybe 6-8 feet in front of their hood. They care about no-one else on the road but themselves. If trucks do have to make an abrupt lane change, it’s because if they don’t the car won’t let them over. The idiot in the car will race up beside the truck and sit there. A lot of trucks can’t do the speed limit. If trucks are making a turn too quickly, it’s because the idiot in the car doesn’t know what a blinker is and the truck is trying to get turned before the idiot gets beside them. If a truck is driving dangerously or erratically, it’s because they are trying to avoid the idiot in the car and his/her driving.”

RJ:  “83% of four-wheelers are delusional. Only 3% of severe crashes involve CMV’s. And 54% are outright liers, saying that they have “witnessed” an accident involving a CMV. They may have seen an accident but witnessing is a whole different thing.” 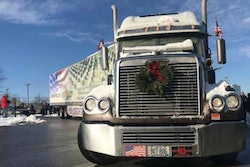 Association donates $50,000 to Wreaths Across America 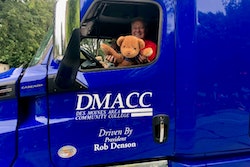 College president with CDL enjoys being at the wheel 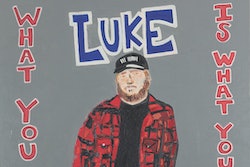 What you see is what you get with Combs’ new album